Haptens are small molecules that can trigger an immune response only when attached to a large carrier such as a protein. Creative Biolabs' dedicated team of experts and highly skilled technicians have extensive experience in small molecule hapten design and can provide customers worldwide with tailored design and synthesis services for hundreds of small molecules to improve their specificity and sensitivity.

Thiamphenicol (TAP) is the methyl-sulfonyl ànalogue of chloramphenicol (CAP) and has similar antibacterial activity to CAP, although its activity is usually 1-2 times lower. It is a potent veterinary antibiotic against infectious diseases in cattle, poultry, and pigs, and has significant activity against both Gram-negative, Gram-positive microorganisms and especially effective against anaerobes. TAP has a bacteriostatic effect on a variety of microorganisms and may have a bactericidal effect on certain species under certain conditions, and its bactericidal concentration is 3 to 5 times higher than the bacteriostatic concentration.

The structure of the TAP is shown in Fig.1. Unlike CAP, TAP does not convert to a glucuronide conjugate in substantial proportions. Although the toxicity is significantly lower than that of CAP, the administration of TAP has been reported to cause the development of reversible anemia without causing chronic bone marrow dysplasia in mice. In addition, it is also found that TAP can induce hematological changes in mice and rats similar to the dose-dependent, reversible marrow depression reported in man. 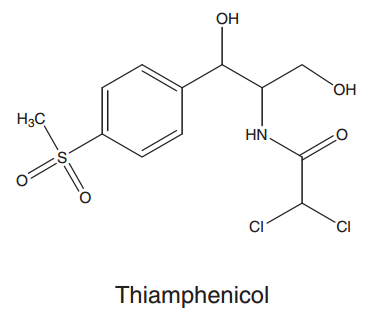 Small molecules are generally not antigenic, mainly due to their small size (<1000 Da). Producing antibodies against small molecules (haptens) requires making the small molecules immunogenic. This can be achieved by conjugating a hapten to a carrier molecule such as a protein. TAP is a small molecule and requires conjugation to carrier proteins in order to be immunogenic. Besides, the number of haptens bound to the carrier protein (i.e., optimal epitope density) and the position of attachment on the hapten is related to the immunogenicity of the hapten. Therefore, the design and synthesis of haptens is a major step in the successful production of antibodies. Hapten design and synthesis must consider the following aspects:

With our passionate team of scientists and experts, Creative Biolabs is committed to solving some of the most challenging issues in small molecule hapten synthesis. We can provide tailor-made small-molecule hapten design and synthesis services according to your needs. For more services, please feel free to contact us.