Aflatoxins are toxic carcinogens and mutagens produced by certain molds that occur naturally throughout the world. They can contaminate food crops under high temperature and high humidity conditions in tropical and subtropical areas, posing a serious health threat to humans and livestock. Drought stress, pests and poor storage may also increase the chance of mold emergence, often found in improperly stored commodities such as cassava, millet, pepper, peanut, rice, sorghum, sweet corn, nuts, wheat and various spices. The mildew of these grains not only endangers human health, but also places a heavy burden on the economy. It is estimated that 25% or more of the world's food crops are destroyed every year.

Aflatoxin has a particularly severe effect on children. Although it has not been confirmed by research, aflatoxin is likely to cause stunted growth and severe liver damage in children. Although adults have a high tolerance to aflatoxin, they also cannot avoid risk. Aflatoxins cause immunosuppression, thus reducing resistance to infectious agents, and it is one of the strongest carcinogens known. After entering the body, aflatoxins may be metabolized by the liver to a reactive epoxide intermediate or hydroxylated to become the less harmful aflatoxin M1. 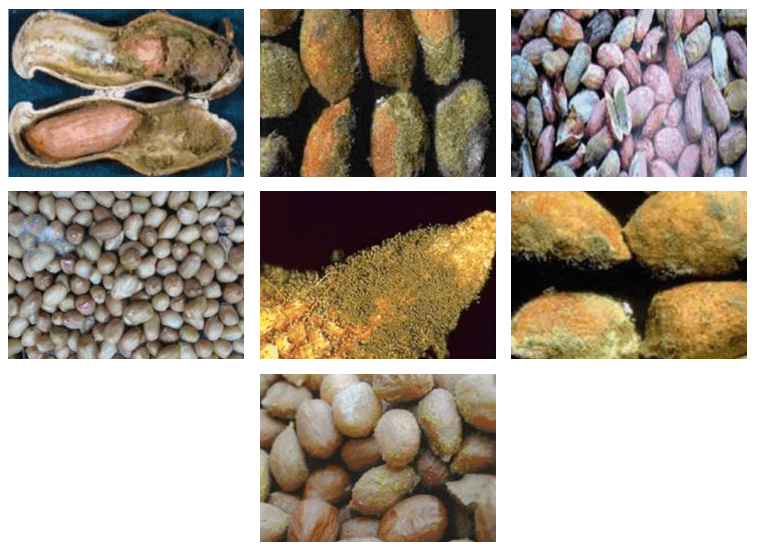 Structure and Classification of Aflatoxins

Aflatoxin is a bisfuran ring toxoid, with various derivatives, named B1, B2, G1, G2, M1, M2, GM, P1, Q1, poison alcohol, etc. Among them, AFB1 is the most toxic and the most carcinogenic. AFM1 is a metabolite of AFB1, and its toxicity is second only after AFB1. The basic structure of aflatoxin includes difuran ring and oxonaphthone (also known as coumarin). The former is its toxic structure and the latter may be related to its carcinogenesis. Besides, Aflatoxin decomposes quickly when it meets alkali, and it quickly decomposes into almost non-toxic salt when the pH is 9-10. However, this reaction is reversible, that is, it recovers under acidic conditions and this chemical reaction can be used for detoxifying food.

Class-specific antibodies against aflatoxins are important for their overall detection. To help customers develop specific monoclonal or polyclonal antibodies of aflatoxin, Creative Biolabs provides haptens design and synthesis services for aflatoxin. Several design strategies are available for Aflatoxins, for example, the carbodiimide method to synthesize haptens with CMO as the linker. We also provide subsequent modification and modification services to ensure that your antibody preparation process goes smoothly.

Creative Biolabs also provides design and synthesis services for aflatoxin-specific haptens. We synthesized the aflatoxin B1 and cysteine acetal derivatives and combined them with albumin and gelatin to study the spectral and immunochemical properties of the reaction products. These aflatoxin protein conjugates have the potential to serve as immunogens for the production of new specific aflatoxin-selective antibodies.

If you want to inquire more about the design and synthesis of aflatoxins haptens, please contact us.